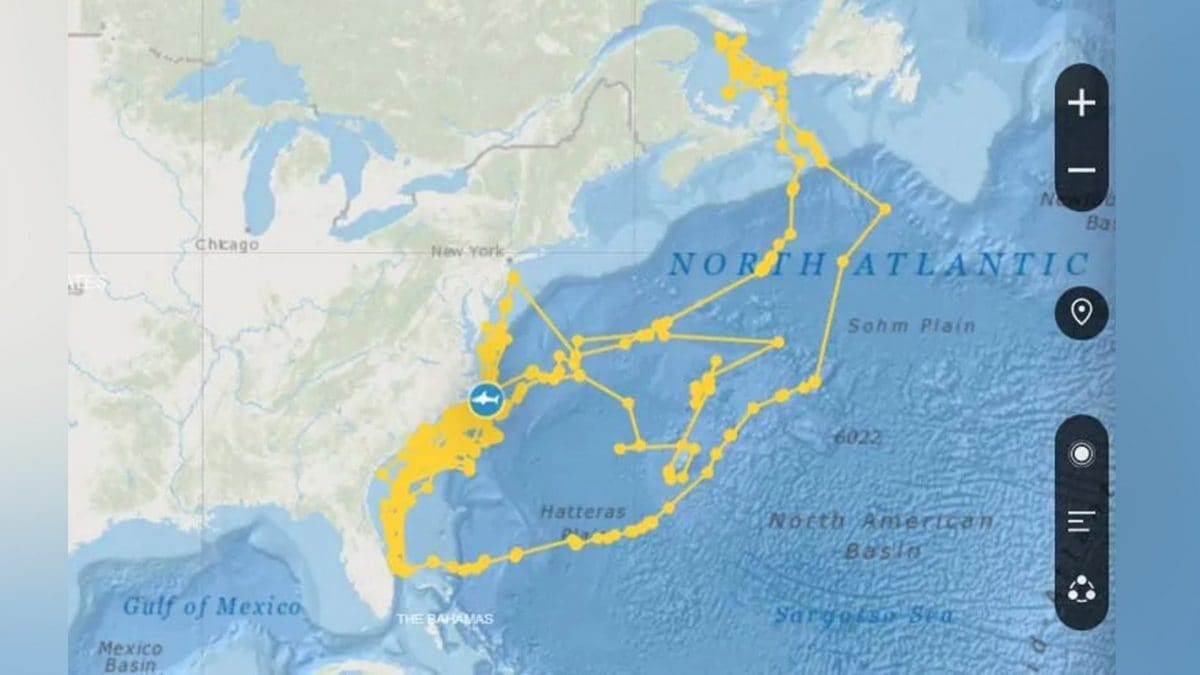 In front of the North American coasts, a male white shark called Breton has “drawn” the silhouette of a shark with a GPS marker.

One White shark (Carcharodon carcharias) with a strong sense of hidden humor has drawn his own “self-portrait” self-portrait Ocean. To get the incredible result he used the GPS beacon that the scientists had placed on his dorsal fin a couple of years ago. When the predator emerges from the abyss, in fact, the looks up to the satellites, and the position it is drawn on a map in near real-time, which can be consulted on a web platform.

Emergence after emergence in front of the North American coast, the white shark has generated many dots that once united give life to the silhouette of a shark, complete with a dorsal fin. heterocercal caudal fin and other details typical of these wonderful cartilaginous fish. Of course, this is just a curious and amusing coincidence, which immediately went viral.

The “artist” shark is a young male named Breton, who has become a real star of social networks. It is about a long specimen of 4 meters her of 652 kilograms, with typical dimensions for the males of this species, whose reputation has been seriously damaged by the appearances of cinema. The females of the white sharks are considerably larger, being able to exceed 6 meters long not 2 tons of weight.

The famous Deep Blue huge female first sighted in 2014 and observed several times in Hawaii and off the coast of Mexico, is believed to have these measurements and an age of 50 years aged is known for swimming placidly both close to divers and dolphins, its natural prey. In the past, information has circulated on white sharks more than 7 meters long or even longer 9 meters but at the moment it is only speculation since they are, not data supported by scientific evidence.

As indicated, Breton lives off the North American coasts and, in his incessant wandering, has visited numerous places: from the coasts of New Jersey to the Chincoteague stretch in Virginia, passing through Long Bay in South Carolina, and so on. In, more than 440 days of tracking she has left behind a whole series of dots which, when joined, as specified, give life to the shape of a shark.

Many on the internet have left sarcastic comments under the image you see at the top of the article, such as “Jaws? More like Draws “(a play on words with the name of Steven Spielberg’s movie and the word ‘drawing’ in English), or” Top level predator trolling scientists “, with clear reference to the term ‘trolling’ in use on the internet.

Breton was equipped with a GPS beacon for the first time on 12 September 2020 in Scaterie Island (Nova Scotia), during a scientific research expedition of OCEARCH a non-profit organization that aims to study these wonderful animals and spread the importance of their protection.

Many shark species are in danger of extinction due to intensive fishing, especially due to the atrocious “shark finning”. Every year according to the data of ICN 63 to 273 million sharks are killed, along with populations collapsed by 70 percent in just 50 years. Their disappearance from the seas would lead to the collapse of ecosystems, being predators at the top of the food chain.